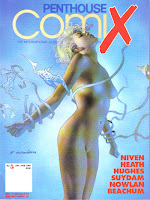 Over at Seven Hells, Devon asks: "What is your most embarrassing comic book purchase… EVAR?!?" (via Lyle)

He goes on to admit that his is multiple copies of the polybagged Superman #75, while respondents go on to list various Rob Liefeld books, as well as other things such as Adolescent Radioactive Black Belt Hamsters and Wildcats: Nemesis.

Me? Oh sure I could list the various comics that I bought in the hazy 90s boom too. But taking the embarrassing part of the question as the crux, I'll admit here that, for sure embarrassment, it must be Penthouse Comix #5.

Now in my defense I bought the issue because it had Curt Swan drawing an adaptation of Larry Niven's "Man of Steel, Woman of Kleenex." And you know what, that story was worth every ounce of embarrassment. Still, given the cover, I was glad that the comic store (Dave's II in Ann Arbor!) used plain brown bags.
Posted by Dave Carter at 12:10 PM

You dog you!
I posted my cringe moment to join the club.