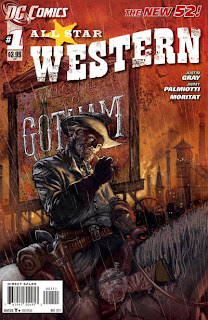 All Star Western #1
by Justin Gray, Jimmy Palmiotti, and Moritat

Original Rank/Assessment: 10 (Yes, with Reservations) - Gray & Palmiotti's Jonah Hex has been consistantly entertaining for going on five years now, but I'm not sure it needs to lose the done-in-one stories nor does it need a Gotham City tie-in.


Month in and month out, one of my favorite titles of the old DCU was Gray & Palmiotti's Jonah Hex; not they've taken the western anti-hero to 1880s Gotham City and thrust the rough-edged bounty hunter into what is essentially a Sherlock Holmes mystery, complete with a late 19th century-style serial killer. Moritat brings a heavy-lined style that works well, though the colors by Gabriel Bautista are a bit too drab even for a western. But despite the change in milieu and the shift to a longer-form story, Gary & Palmiotti's Hex is still the same character we've come to expect, and that's a good thing indeed. This isn't their best Hex story, at least not yet, but it will do. 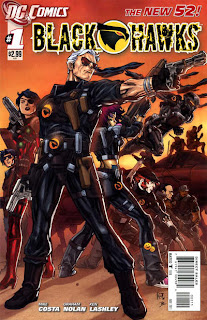 Original Rank/Assessment:  38 (Maybe/Provisional) - Could be interesting, but could also go disastrously wrong. (Now if Jock were drawing this, I'd be all up for it...)

I imagine when the New 52 were being dreamed up, the editorial staff was looking at what kind of comic genres they could mine to fill out their remaining few slots and someone came up with the idea of doing G.I. Joe in the DCU. So they appropriated the Blackhawks name, went out and got Mike Costa—known primarily for doing G.I. Joe comics for IDW—to write it, and ended up with a second rate G.I. Joe comic set in the DCU. This comic isn't really horrible, but it commits the cardinal sin of being boring and unmemorable, full of generic characters with the personality of their non-existent action figures. Nolan is usually a dependable go-to artist, but here he provides only the layout and Lashley's finishes don't do them any favors. This comic really needed a unique and visually interesting art style to help it stand out, but comes up far short. This comic alas is entirely forgettable.