Original Rank/Assessment: 46. (Definitely No) - Seems like for the last five years or so I've always been on the verge of dropping this title, but there was always another new creative team around the corner. But this looks to be the final straw.

After Lobdell's surprisingly good work on the new Superboy comic two weeks ago, I was cautiously optimistic about his Teen Titans; then after last week's Red Hood debacle, that optimism slipped away. His Teen Titans turns out somewhere between the two. Kid Flash and Wonder Girl resemble their previous versions in name only, so it maintains the pod-people aspect of Red Hood but without the elements that made that comic highly offensive. This is another get-the-band-together comic, but by the end of issue #1 the band isn't even even half formed yet. And it looks like this comic may be very tightly linked to Lobdell's Superboy, which could be bad news if knowledge of one is necessary to enjoy the other. The script leaves plenty of room for Booth to overdraw big panels of people who look like half-elves. All in all it could have been a lot worse, but it also could have been a lot better. 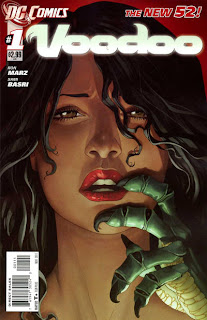 Original Rank/Assessment: 36 (Maybe/Provisional) - This will really depend on the execution by a solid but not exciting creative team.

It's really saying something when the comic about a bisexual alien stripper is not the most exploitative comic in DC's New 52 (but that something isn't exactly positive...) It's possible that Marz is going someplace interesting with the character: the guys that visit the strip club are not portrayed in a positive light; the female agent has the makings of a potentially interesting character; and by the end of the comic it appears that Pris/Voodoo is leaving stripping behind to continue her mission. Maybe Marz is just using the character's previous profession as a jumping-off point to something more interesting. All of that reasoning would be easier to swallow without Basri's cheesecake art. Still, we'll wait and see if issue #2 finds the comic crawling out of the slime-gutter or if it stays in exploitation land.