Original Rank/Assessment: 28 (Maybe/Provisional) - I want to support this title, but man, that cover... ugh.

Of all of the New 52 titles, this one is the most Vertigo-esque, right down to the writing style and the coloring. In fact, it wouldn't surprise me to learn that this had originally been a pitch for a Vertigo comic before the New 52idea came along, and Fialkov just took out some four letter words and added in a couple of references to super-heroes. This first issue ably sets the stage for the story of Andrew Stanton, self-appointed policeman of vampires, who now must face organized resistance by his former lover Mary, Queen of Blood. Sorrentino's art is highly reminiscent of Jae Lee, and even though there is plenty of violence it is stylized and appropriate to the story and not at all gratuitous like we have seen in other of the DCnU books this month. So if you can get past the gratuitous nearly-naked woman on the cover, you'll find the beginnings of what looks to be an interesting vampire saga. 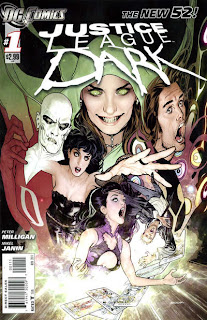 Original Rank/Assessment:  33 (Maybe/Provisional) - Horrible title, interesting premise. And that Milligan guy, who will now be writing both the Vertigo and DCnU versions of the character.

One has to imagine that Justice League Dark was simply a working title for this book, but as the solicitation deadline loomed they couldn't come up with anything better so we're left this awkward title. (And frankly, putting "Justice League" in the title will likely help with sales...) With the regular Justice League unable to handle the supernatural threat of The Enchantress, Zatanna decides to round up some of her supernatural colleagues to try to form them into a team. Although hopefully 'team' will be a very loose concept as it's hard to see this motley crew able to band together other than if they absolutely have to. It's a good start in a getting-the-band-together sort of way, so we'll how well Milligan is able to take the concept from here.

I liked JLD. I thought the art was pleasing, and the story functioned, in the least. It's near the bottom of my list of 'buy the second issue'. We'll see.