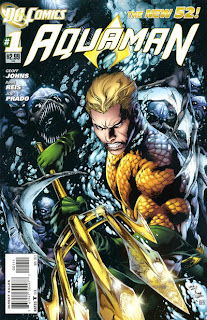 Original Rank/Assessment: 29. (Maybe/Provisional) - I always give new Aquaman titles a try, but am often disappointed.

I'm glad to say that this time out I was not disappointed. I always expect Johns & Reis to produce a comic that is at least competently done, and they do so with the kind of Aquaman that I like: powerful, heroic and stoic. The basic plot here is simple, as a series of events convinces Aquaman to re-dedicate his time to the surface world, while meanwhile a Lovecraftian threat is rising form the deep. But it's a perfect plot for a first issue as it sets the stage for what is to come, tells us how Johns is going to approach the long-time character (who in the real world just celebrated his 70th anniversary!), and provides plenty of action. I'll admit that I'm a bit concerned as to what I've seen of the possibly gratuitous violence of future issues, but for now I'm rating the comic in front of me, and it was quite good. 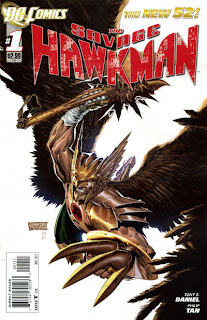 Original Rank/Assessment: 52 (Definitely No) - Non a huge fan of Tony Daniel's writing, and even less of a fan of Philip Tan's art. A very easy no.

The big surprise here was how much I didn't hate it. Oh it wasn't a perfect by any means; the opening scene goes on too long, Tan's artwork is muddled in places and the coloring is far too dreary for a comic about a man with wings who can fly. But Daniel's new take on Hawkman as a man who is literally possessed by the Nth metal is intriguing, and I liked the bits with Carter Hall working with a team of xeno-archaeologists. So while I wouldn't say that this rise to the level of being a perfectly good comic, neither was it the worst of the new 52 titles DC published this month.