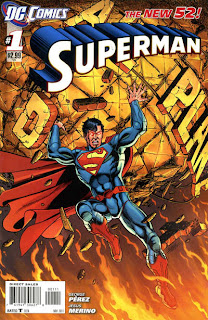 Original Rank/Assessment: 2. (Definitely Yes) - I'm actually a bit apprehensive about the Superman reboot, like I am with every Superman reboot. But with Morrison & Perez at the helm, I'm fairly optimistic this time out. Plus, I've bought every issue of Superman since 1982, and I'm likely not stopping until I'm dead or it stops being published.

And thus we come to the end, the last of the New 52 number ones. I opened week 1 with Action Comics, so it seems fitting to close out week 4 with Superman.


This is pretty much what I would want out of a first issue of a new version of Superman: plenty of action with Superman being super, and an introduction to the supporting cast. As with Action Comics, we don't need an origin story; we basically know who Superman is, and despite some funny minor changes to his costume we still recognize this Superman as Superman. One of Pérez's skills as an artist is that he can make any super-hero costume look good, no matter how ridiculous it is!

Another of Pérez's skills is the ability to cram a page full of story without it seeming too crowded. There are an average of seven or eight panels per page in his layouts, compared to for example this week's Teen Titans which averages just half that (and you could probably read this month's Supergirl seven or eight times in the time it takes to read this one issue of Superman!). And with the extra five pages in this inaugural issue,  we get a lot of Superman story. Merino, no slouch of an artist himself, works admirably on Pérez's layouts, and I suspect that these next six issues will see him kick his art up to the next level via the experience.

One of the things I like is how the citizens of Metropolis react to Superman. They're not afraid of him—he's obviously saved the city too many times for that sort of silliness—but neither are they reliant on him. As the comic opens, it appears that Superman has been away for a while, and that this is not an odd occurrence. Superman is still something of a mystery to the City of Tomorrow. Clark Kent has settled in at the Daily Planet, but is not (yet?) a Pulitzer-winning front-page journalist. He is clearly in the shadow of an older and wiser Lois Lane, who is moving up in the world of Morgan Edge's media empire.

We've seen bits and pieces of Superman over the first month of the new DCU, but he is still something of a cipher. Even here is his own title we mostly see Superman through the eyes of others and have yet to get inside his head; even the newspaper 'voice-over' by Clark Kent is a detached objective view of the action. I look forward to seeing how Pérez and Morrison, working in tandem at opposite ends of Superman's career, flesh out the character over the coming months.

I was impressed, but I was ready to be disappointed.