DCnU Reviews, Week 4: The Flash; The Fury of Firestorm 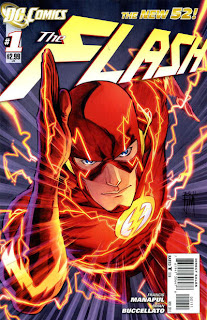 Original Rank/Assessment: 30 (Maybe/Provisional) - Can Manpul write? I'll give his a shot, but I'm not a huge Flash fan so this will be a very short trial.

Another pleasant surprise from the New 52. Not only can Manapul & Buccellato write, but they're also doing some interesting things visually as well. It's hard to do The Flash without pulling from the work of Carmine Infantino, so ingrained is Infantino's vision of super speedsters in comic's collection psyche. And his influence is here as well, but it's not overwhelming. The action scenes feel fast and fresh and bring a sense of motion to the page. The plot beings a police procedural/CSI-ish style to the comic, one that the previous version of The Flash was trying to do, but Manapul & Buccellato pull it off better, likely because they're not also trying to tie the comic into a grand time-travel plotline or setting up the next big crossover. If left to its own devices, this could be an enjoyable monthly super-hero speed trip. 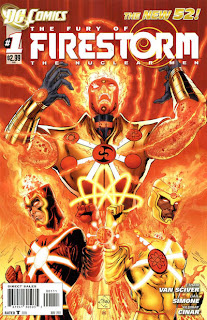 The Fury of Firestorm, the Nuclear Men #1
by Gail Simone, Ethan Van Sciver, and Yildiray Cinar

Original Rank/Assessment: 12 (Yes, with Reservations) - Big fan of the character from the 80s and the recent Jason Rusch version as well. It will be interesting to see how Van Sciver & Simone merge their sensibilities in writing.

This is a complete reboot of the character, not too surprising as all of the previous versions had become so convoluted in their continuity over the years (okay, not even close to Hawkman level, but still...) Simone & Van Sciver do a great job setting up Ronnie Raymond and Jason Rusch as high school students in conflict but not making either one in-the-wrong or a jerk. Cinar has really stepped up his game here; this is the best art of his career so far, and when the Firestorms show up near the end, the pages ooze with power (aided in no small measure by Steve Buccellato's vibrant colors). This is another comic to keep following.