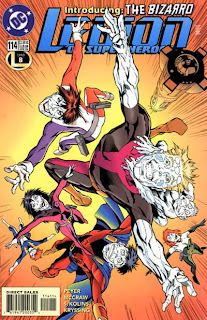 Who is that on the shoulder of Bizarro Brainiac 5 on the cover of Legion of Super-Heroes #114? It's Bizarro Koko! This cover by Alan Davis & Mark Farmer is our second (of two) Bizarro Monkey covers, following Bizarro Titano from the week before last..

Image is courtesy of the GCD. Click on the image for a larger version.
Posted by Dave Carter at 8:34 AM