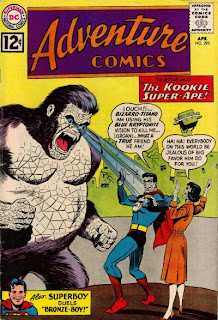 The first Monkey Cover of 2005 is 1962's Adventure Comics #295. John Forte's cover illustrates Jerry Siegel's "Tales of the Bizarro World" story: "The Kookie Super-Ape." That's right, a Bizarro version of Titano, with Blue Kryptonite vision. I tell ya, they just don't make comics like this any more (but we're holding out hope for Morrison & Quitely's upcoming All-Star Superman...)

(Standard disclaimer about apes not really being monkeys applies.)

Image is courtesy of the GCD. Click on the image for a larger version.
Posted by Dave Carter at 2:40 PM