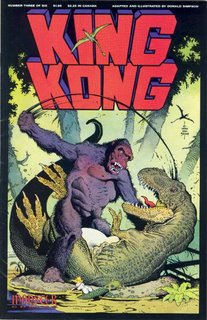 In honor of the Academy Awards ceremony this evening, here's the cover to 1991's King Kong #3, featuring the big ape himself putting the smackdown on a dinosaur. (Peter Jackson's King Kong remake has four nominations this year.)

(Standard disclaimer about giant apes not really being monkeys applies.)

Image courtesy of the GCD. Click on the image for a larger version.
Posted by Dave Carter at 12:05 PM