Each month I go through Previews to highlight twelve items worthy of attention in three categories: Mainstream Comics, Indy Comics, and Collections/GNs.

First up for the march Previews (comics supposedly available in May) are the following dozen mainstream comics picks:

Marvel's all-ages line expands with an Avengers title from writer Jeff (Interman) Parker, who has quietly been making MA Fantastic Four the FF title to read over the past few months. Sure, the team's line-up (Storm, Wolverine, Giant-Girl, Iron Man, Spider-Man, Hulk, Captain America) doesn't resemble and 'real' Avengers team, but will that really matter as long as the stories are entertaining?

The first issue came out of nowhere to be one of the most entertaining super-hero comics of the young year. Okay, not exactly from nowhere, but it's been a long long time since Ellis's Marvel work was this enjoyable. Issue #5 kicks off a new storyline, which makes it a perfect place to jump on if you haven't already.

Legndary artist John Severin joins writer Garth Ennis to tell a double-sized tale of Frank Castle's dark youth on the street of Brooklyn. Sure to be worth it just for the art alone.

Richard Corben adapts the stories and poems of Edgar Allen Poe. Could you ask for a better match? 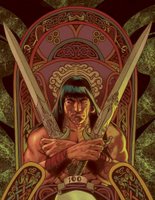 The Goon creator Eric Powell joins writer Kurt Busiek for a done-in-one tale of Conan doing those things that Conan does so well.

Will Pfeifer & Cliff Chiang bring the Spectre to a new host, one who is closer to the character's roots: the late Detective Crispus Allen from Gotham Central. Hopefully we'll get a good deal of down-to-earth detecting along with the supernatural action. Plus, any comic that gives me Cliff Chiang's art is worthy--hopefulyl this will sell well enough to become a regular series.

C'mon, you know you want it. Have Grant Morrison, Geoff Johns, Greg Rucka and Mark Waid ever let you down? Okay, maybe on occasion, but I suspect that all four will be bringing their A-game to this.

They went in with six? What were they thinking?! You always go in with seven, or possibly five, but never six! Gail Simone returns to the mileau of her successful Villains United series with more tales of villains caught between a rock and a hard place.

DE puts out a licensed comic I may actually be interested in--what the heck, it's worht a quarter to see if it approaches the quality of the tv series. Too bad about that photo cover though.