It's the 40th anniversary of Star Trek. To celebrate, let's look back at nearly 40 years of Star Trek comics 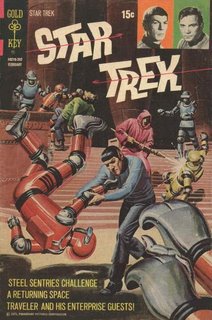 The first Star Trek comics started in mid-1967 from Gold Key, and ran long past the demise of the show to 1979 (61 issues in all, though I think that some reprinted earlier material). They are mostly remembered by Trek fans as bearing little resemblance to the Star Trek show; it often seemed as though they just took stock scifi comics situations and inserted Kirk, Spock, et al. Still, some of those covers were pretty fun! (Checker has been reprinting the Gold Key Star Trek in trade collections.) 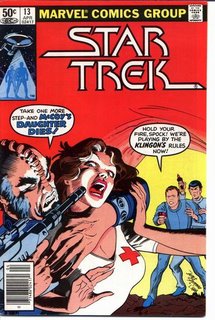 In the wake of Star Trek: The Motion Picture, Marvel picked up the Star Trek license in 1980, taking the same approach they did with the Star Wars license by adapting the movie then continuing with original stories. Alas for Marvel Trek was not as successful as Wars, and the series lasted just 18 issues before receiving the axe. 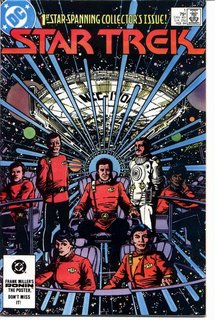 The Wrath of Khan came and went with no Trek comic in sight, but shortly before The Search for Spock DC picked up the Trek license. Early stories were by Mike W. Barr and Tom Sutton, and marked the first time (IMHO) that Trek comics managed to get close to the flavor of actual Star Trek. later issues of the series would feature Peter David's debut as a Trek writer. 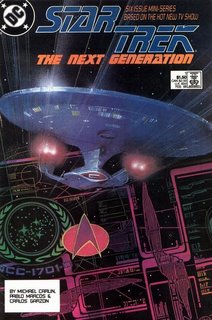 DC also picked up the license for The Next Generation, producing a six-issue mini-series along with the show's first season. 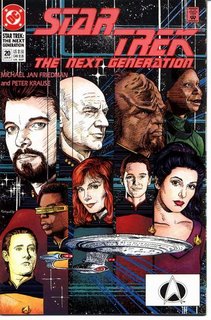 Then there was an 11-month gap in DC's Star Trek comics; I'm not sure exactly what happened, but I suspect that the license lapsed and Paramount went looking for a higher bidder. If that was the case, they found none, and Trek ended up back at DC in 1989, with both classic Trek and TNG starting new ongoing series.

Jerome K. Moore was onboard as the regular cover artist, producing some great-looking covers that were reminiscent of movie posters. 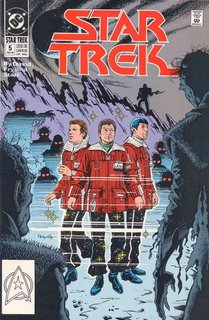 DC's second classic Trek series was also notable for the supposed rift that developed between writer Peter David and an assistant of Gene Roddenberry's. The assistant reportedly reject out of hand any script submitted with David's name on it, often requesting outlanding changes. When DC submitted a script by David with a pseudonym attached, the script came back without changes, prompting David to resign, feeling that some sort of personal vendetta was keeping DC from baing able to produce a good Trek comic. 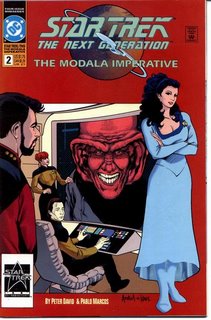 DC also produced The Modala Imperative, a cross-over of sorts with a story that began in a four-issue classic Trek series and concluded in a TNG mini. 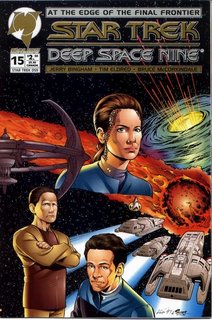 This time period also saw a Deep Space Nine comic, but it was Malibu, not DC, that picked up the license. They produced fifteen issues of an ongoing, plus several separate mini-series. 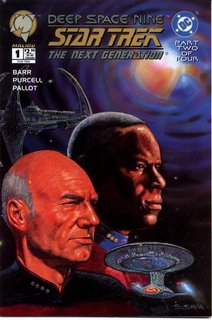 DC and Malibu even cooperated on a DS9/TNG crossover mini, with each company publishing two parts of the four part series.


Both of the ongoing Trek series from DC lasted another 80 issues before DC the license lapsed at the end of 1995. Malibu's license ended at this time too, and Paramount did not renew any of the Trek licenses. But that was not the end of Trek comics; Paramount had plans of their own, which we'll see in Part 2 (coming real soon, I promise!)

(all images courtesy of the GCD)
Posted by Dave Carter at 1:43 PM

You might find my take on Star Trek interesting:
http://foxhugh.wordpress.com/2008/05/21/star-trek-vs-star-wars/

The site in general deals with What if fights. Right now I am doing a ton of work on DC vs, Valiant characters.