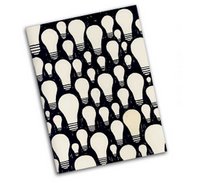 A grab bag this time out:

Linda Medley's untitled minicomic with lightbulbs on the cover plays with the formal visual language of comics for an enlightening little vingette. It doesn't compare to her Castle Waiting, but then it's not suppsoed to. I'd like to see more of established cartoonists using the freedom of minicomics to try out things they normally wouldn't do. (from One Percent Press)

Evan Keeling's Ataxia Overdrive (vol. 1 pt. 1) resembles a scene from Run Lola Run, if Lola was being chased by creepy monsters in cloaks. Keeling produces a fun little action scene, but there's no story to go with it--it's begun in media res and just stops before any sort of conclusion. But since it looks like this mini is meant as a trailer for his Webcomic I guess that's okay.

Eleanor Davis's I've Lost My Spots will probably remind you of one of those children's picture books with holes in the pages, where you peek through to the next page and it melds with the image of the page you are on. Davis applies this technique to a fun little mini comic.
Posted by Dave Carter at 7:36 AM