Over at Crocodile Caucus, Lyle asks:

It's a good question. In terms of sheer number of volumes, TP & Viz put out about the same number of titles per month, but they definitely have a different image in the comics blogosphere. Some of the responder comments point to things like quality, shipping schedule, and Viz's use of imprints.

Those are some good anectdotal possibilities--and when you're dealing with perception, anectdotal evidence can go a long way. But I suspected there was something else going on as well, so I did some number crunching. I looked at the TP & Viz sections in the current issue of Previews (September, for items supposedly on sale in November). A pure count shows that TP has 39 volumes, Viz has 38 (for purposes of this analysis I didn't count Shojo Beat or Shonen Jump). But then I counted how many titles each publisher had with a particular volume number; i.e. how many titles were on vol. 1, how many on vol. 2, etc. Here are the results in handy histograms: 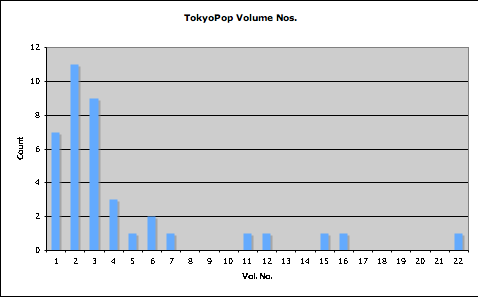 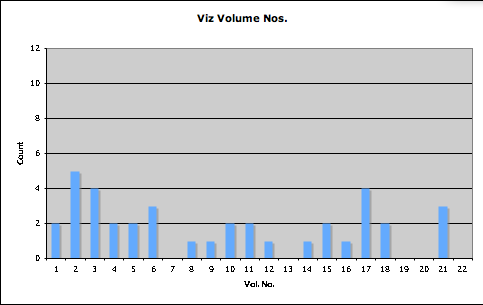 As can be plainly seen from these graphs, TP's output is weighted far more towards the early volume numbers, while Viz's output as a whole is far more mature. The median volume number for TP is 3, while the median for Viz is 8.5.*

So that's where the “throw it at the wall and see what sticks” image for TP comes from; they're putting out a lot more new series every month, while Viz is more likely to stick with longer-running series. This means that each month readers and retailers are faced with an array of many new choices (or ordering decisions) from TP, while with Viz they know more what they're getting into.

Just another piece of the puzzle.


(* You might be tempted to try to take an average, but I think that your college statistics professor would likely have told you that you cannot take averages of ordinal data.)


Update: Three months worth of data graphed here.
Posted by Dave Carter at 8:16 AM

That is awesome. Thanks for taking the time to do that. I don't suppose you'd be willing to look back a couple months to see if the pattern holds?

Yeah, I think I will; lemme see how far back I've kept issues of Previews...

Let me know if you want more Previews volumes, I probably have back to the beginning of the year.

If you want, I can drop them off at the library, addressed to your attention.

Oh wow. I knew TP put out a lot of new titles every month, but I didn't realize just how disproportionate it was to the length each title actually runs. Hmm. I wonder how much of that is OEL, as well? Do they simply discontinue series, or do they only pick series that are short runs? Or is it that the frequency of release between volumes slows down the further along they get? When I started "Tramps Like Us," it used to come out every other month, I believe. But it seems like there's a greater distance between volumes, now. Whereas Viz gives the appearance of a much more steady schedule--avoiding flooding the market with the first several volumes all at once and instead keeping to a regular pace between volumes. But then again, that could be because most of the graphic novels aren't published until the story has been run in Shonen Jump or Shoujo Beat. If TP ran a periodical with their titles, would that mean more consistency?

Just something to think about. :) I think you bring up an excellent point and that it does a lot to distinguish the difference between two companies with the same volume of sales.

It would be interesting to cross-reference these with Bookscan sales numbers, as well.

I ran the numbers for August & July Previews as well, they're here.

Rivkah: I think you're right about OEL titles having an impact for TP; all of those titles are new, only come out two or three times per year, and are slotted as three-volume (or less) runs.

A major factor is that series from the biggest publishers (Shueisha, Shogkukan, Kodansha, Hakusensha) tend to run much longer. The second tier companies that everyone but Viz and Del Rey pull from tend to have much lower volume counts. It's not as if Tokyopop doesn't want long running hit series...

If you looked at the issue in reverse, say if there were three publishers in Japan publishing American comics, and company A publishes only Marvel and DC and company B only publishes a couple of Marvel titles, but mostly Image, Dark Horse and Oni comics, Companies A would have a much higher percentage of long running titles.

Er... in last paragraph, I meant "two companies" and "company A"

Rivkah, those are great follow-up questions that I think Dave's data has helped raise.

To me, this conversation about Tokyopop is about trying to understand its challenges in an industry that's changed quite a bit since it became a major player. Tokyopop has been at a "change or die" stage for at least a year and they've clearly been trying to adress these new challenges. I'm curious about getting a clearer picture of these challenges so that I can understand them better (partially because I would like to offer the kind of constructive critism that Tokyopop asked for during the last dogpile about the website revamp).

Regardless of why it turns out this way, I think these charts illustrate one of Tokyopop's challenges -- each volume 1 requires a launch effort to let potential customers know what a title is about... I do think that is one arena where the revamped website and the online exclusives have potential.

Viz definitely has an advantage, with longer series they can print more books without having to teach customers why they want to read a title -- they have less marketing to do and, with their two magazines, they have some effective means of marketing... but that doesn't matter to the average customer, who's only thinking of that title that sounded interesting to them when they hit the bookstore.

The question for Tokyopop is how can they overcome this disadvantage? More marketing? Fewer series (which would get more attention from a less spread-out marketing deptartment)? Viral/social marketing? Shifting to niche markets? It's an intrguiing question and a puzzle I'd like to see Tokyopop figure out.