Teratoid Heights
by Mat Brinkman
Mostly wordless, these short tales consist of odd creatures moving and existing in surreal landscapes. They are oddly both comforting and disturbng, and in their own inhuman way speak to the human condition through the lens of the cutely grotesque. The cartoons remind me somewhat of the Jim Woodring's Frank, though Brinkman's beings are less identifyable than Woodring's cartoon characters, and thus more of a blank slate upon which we the readers can project our own fears and yearnings. Published by the now-sadly-defunct Highwater Books, Teratoid Heights is a prime example of why that publisher will be missed.
Rating: 4 (of 5)

Hickee
edited by Graham Annable
This anthology contains short humor pieces by the likes of Joe White, Nathan Stapley, Paul Brown, Ramzig Mavlian, Graham Annable, and several others. Unfortunately it misses far more often than it hits. For every fun bit like White's "The Bear" or Annable's "Dirty Trick" there are far too many pieces that rely on sophomoric gags about sex or bodily functions. Actually 'sophomoric' is giving some of the strips a bit too much credit, as deriving humor from someone called 'Ze Fartmaster' aims squarely at ten-year-old boys. It's maybe 25% good stuff, but that's not quite enough to recommend an anthology. But it's probably worth borrowing from a friend or the library.
Rating: 2 (of 5) 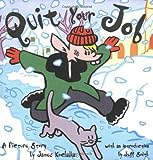 Quit Your Job
by James Kochalka
This charming little book finds 'Daddy,' a funny looking guy with elf ears who lives alone with his cat, waking to find a deep snowfall, and skipping work so that he and his cat can frolic in the snow. They find a magic ring and decide to journey to the North Pole, but get distracted at a coffee shop where their robot friend Jason X-12 works. I've never been much of a fan of Kochalka's, but this story mostly works, as there's a sense of joy, innocence and a tinge of saddness in Daddy's character. On the downside, the story meanders at the end rather than coming to a conclusion, and the occasional burst of profanity from the characters is at odds with the rest of the tone of the book. But still, this is one of the better things that I've read from Kochalka, and it's probably worth your attention.
Rating: 3 (of 5)