You Too Can Be a Girl Genius 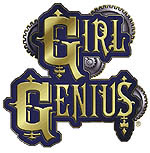 Later this year (or perhaps a bit later...) Steve Jackson Games will be releasing the Girl Genius Sourcebook and Roleplaying Game, based on the fourth edition of their flagship RPG, GURPS. It will be fully illustrated in color by Girl Genius creators Phil & Kaja Foglio, and is co-written by Kaja Foglio (herself a longtime GURPS player). Since GURPS is my RPG of choice, this is quite exciting.
Posted by Dave Carter at 7:56 AM