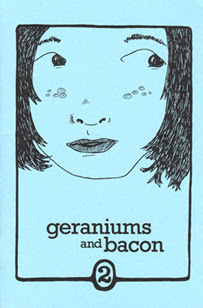 Issue #1 opens strong, with "Little Kid Dreams," a series of captioned single panels; and "Self-esteem," a talking-head bit. She closes the issue with "Faith Crisis," a several-page long retelling of her struggles with religion. It's the weakest part of the issue; while Leamy's religion issues are something that nearly everyone goes through (typically in one's early twenties), it's a process that is of interest to the person going through it but not really to anyone else, and she is unable to provide any new insights. To her credit, she closes the piece by relating a phone conversation with her mother that takes the piss out of the whole self-indulgent struggling.

Issue #2 is stronger than #1, providing some excellent laughs. Especially strong are the opening "Writer's Embelishment" episode, and the two-page pseudo ad for "Lysol Gay-Away". "The Dream," wherein Cathy transforms into the 'Goddess of Sex and Math,' had me laughing out loud. It's a generally stronger offering than issue #1, showing Leamy's growth as a cartoonist and storyteller.

Art-wise Leamy has an open, cartoony style that shifts around slightly depending on the mood and requirements of the story. There are very few sharp edges, except where required, giving her art a free-form look.

Leamy reminds me of a young Pam Bliss, which is high praise indeed. I expect to see continued growth from her as she refines her style and outlook and look forward to reading more.

In addition to these collections, Leamy also has a continuing mini comic series, Between the Lines, which I hope to read at some point.

Mini comics can be hard to find, but copies of Geraniums and Bacon can be purchsed online via Small Press Swapmeet.

(review copies of these materials were furnished by the creator)