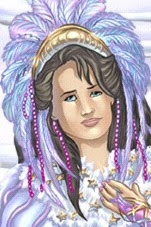 I'm not a big fan of online comics; I spend the majority of my day at work in front of a computer, so when I'm relaxing with a good book I'd rather be looking at print. But when I learned from Johanna that there was a new DreamWalker comic available only online, I overcame my resistance and decided to go for it.

DreamWalker is one of those good indy series with a spotty publishing history. It started nearly ten years ago as a self-published effort for five issues, then it moved to Caliber's ill-fated Tapestry imprint for six issues. In the wake of the Caliber implosion, DreamWalker moved over to, of all places, Avatar, where it didn't really fit in with the rest of the publisher's offerings, but Barry Gregory was affiliated with the company. (Nearly all of the back issues of DreamWalker can be ordered online at the DreamWalker Press Website, at a sale price of just 99 cents!)

The premise behind DreamWalker is simple: Karen Brinson, a bookstore clerk, discovers that she has the ability to enter other people's dreams. Her abilities are largely uncontrollable though, and as the series progresses Karen tries to learn how to better control them, while at the same time dealing with what she learns about close friends and total strangers through their dreams.

DreamWalker: The Winter Tree picks up the story where it left off, but it's a relatively slow start. The first several pages find Karen wandering in a wintery dreamscape, unsure as to whose dream she is in. Later at the bookstore, she relates her aborted attempt to meet her previously unknown father. The comic ends with Karen's mentor, Mrs. Tobias, in a dream of her own that turns into a nightmare. It's a good re-introduction to the series, but I found myself wishing that there was more. This is the first time that DreamWalker has appeared in full color, and it is employed to mixed results: the opening dream sequence looks stunning, but the scene at the bookstore looks a bit unreal. The closing scene employs the color quite well though as it subtly shifts as the true nature of Mrs. Tobias's dream reveals itself. 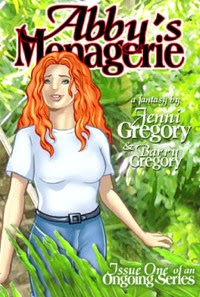 Since BitPass (which is required for purchase at Zero One Comics) has a minimum credit amount of $3, I also purchased and downloaded the first issue of Abby's Menagerie, another online comic from Gregory that, if I recall correctly, originally appeared a couple of years ago in a different venue. In the story, the titular Abby, a successful business woman, finds herself at a mysterious zoo that only has extinct animals. While exploring, Abby finds herself tossed through time where she observes the gradual downfall of one of the animals, the tasmanian tiger. The story gets to be a bit preachy, but there's also a good deal of substance and it serves to set up the basic premise of the series. (I don't know if the story ever continued or not...)

As for the online readng experience, it's better than most online comics offerings. Each issue is a self-contained Flash file, and you page through the comic either by using previous/next links and/or clicking on a page number. Since these comics were originally created to be read on a computer screen, each page is in landscape format, and you can easily read the text without having to zoom in.

I'm happy to get new DreamWalker material, even if it is online only, and I'll definitely purchase new issues as they become available (soon I hope!) Hopefully when "The Winter Tree" is finished it will be collected into a print edition so it can be enjoyed in a more tangible format. (And hey, I would love to see collected editions of the previous DreamWalker volumes as well--I have a feeling that digest-sized collections would do well in the current market.)

do you still have the comic? abbys menagerie?