Yet Another Music Moment: Enter the Haggis 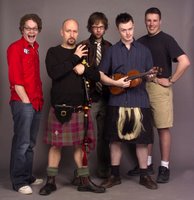 Saw the Toronto-based band Enter the Haggis play at The Ark last night. I'd never even heard of them before, but it was Take-A-Chance Free Music Tuesday (price of admission is a can of food for FoodGatherers) so we took a chance: They were fantabulous! They put on a great, energetic, fan-pleasing show, and they had the musical chops to back it up.

EtH are a celtic-rock band, kind of like Great Big Sea but they rock harder. After the show I dl'd one of their studio albums, Casualties of Retail, from iTunes; it's good, but I think they work better as a live act. They also have sample tracks in MP3 and a couple of live performances in Windows video on their Website.

So if Enter the Haggis comes to your town, it's worth a trip to see 'em.
Posted by Dave Carter at 12:45 PM