I woke up to the sad news this morning that Christopher Reeve has died (NYT obit). Reeve of course is best known for his portrayal of the Man of Steel in four Superman movies of the 70's & 80's, and for his work as an advocate for spinal injury research after a 1995 equestrian accident left him paralysed. While I'm sure much will be written about the latter, I wish to focus on the former and the role that made him famous. 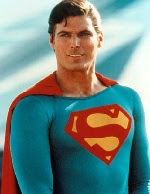 I was eight years old when Superman: The Movie came out in 1978. I'd already had my little mind blown away the year before with Star Wars, but Superman was something else yet again. This wasn't the fantastic happening in a galaxy far away, but happening in our world. More than the special effects, it was Reeve's portrayal of the super-hero which made the movie work. Not only did you believe that a man could fly, but also that Clark Kent could hide his identity behind a pair of glasses. By changing his body language and voice, Reeve made it possible to believe that even a top reporter like Lois Lane could not tell that Clark & Superman were one and the same. He protrayed Superman as a strong and slighly hokey boy scout, yet at the same time made a man in blue & red spandex a sex symbol. The producers took a big risk casting a then-unknown Reeve as the Man of Steel, but very few other actors could have carried off the role.

Superman: The Movie created the mold for all modern super-hero films. Just as Curt Swan will always be the Superman artist for me, Christopher Reeve will always be the Superman actor. By coincidence, I was just yesterday listening to John Williams' soaring score from the movie, and in my mind's eye pictured Reeve soaring through the air. So thank you Christopher for bringing a bit of wonder to this Superman fan's life.
Posted by Dave Carter at 8:02 AM

That was sad news...I wonder if Ron's blogged about it yet--haven't checked his blog yet. I go there now.

Ron doesn't seem to have blogged anything in a couple of weeks--I hope he' okay...

Yeah--I was noticing that--which is why I hadn't checked his blog in the past week or so until this came up.