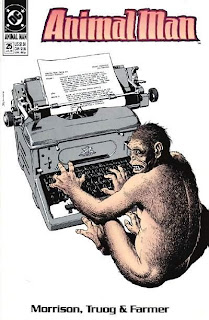 From Animal Man #25 comes Brian Bolland's rendition of writer Grant Morrison as one of an infinite number of monkeys, the one who is churning out the script to this issue, the penultimate of Morrison's run. More than half a year before his career defining turn on Doom Patrol, Morrison staked out the weird corner of the DCU with his tales of Buddy Baker, a third-rate super-hero who found himself in adventures of meta-comic angst. He also took the obvious step of making Buddy an animal rights activist, giving the character a distinct personal review and a personality.

While Morrison would leave the title after issue 26, Bolland stayed on as cover artist through issue 63, out lasting writers Peter Milligan & Tom Veitch and going partway into Jamie Delano's run.

Image is courtesy of the GCD. Click on the image for a full-sized version.
Posted by Dave Carter at 12:50 PM

Whenever I read the issue where Buddy meets Grant there's a part of me that thinks of the A-Ha music video "Take on Me."