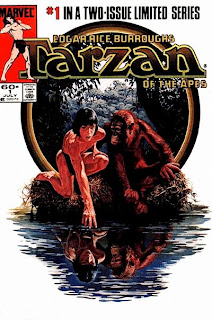 This gorgeous piece from Marvel's Tarzan of the Apes #1 features the young Lord Greystoke and his faithful chimp friend Cheetah gazing at their reflections in the water. Alas, it is unsigned, and GCD doesn't know who the artist is either.

Presumably done to capitalize on the 1984 film Greystoke: The Legend of Tarzan, Lord of the Apes that came out at the same time, Marvel apparently didn't have the film adaptation rights, so they went instead to the public domain source material of Burroughs' original novel. The adaptation is by Sharman DiVono & Mark Evenier, with art by the talented Dan Spiegle.

(Are chimpanzees monkeys? I don't think they are. Oh well.)

Image is courtesy of the GCD. Click on the image for a full-sized version.
Posted by Dave Carter at 2:40 PM

Okay, GCD is back up. You can now enjoy cool monkey covers again :)