In this post I'm reprinting reviews of items for which I gave a rating of 4 or better in the month of November:

Scandalous
by J. Torres & Scott Chantler
Scandalous tells the story of Harry Richards, a private eye in 50's Hollywood who moonlight by gathering info for a gossip rag. After his best friend, a casting director, is fingered (unjustly) as a communist, the two of them launch a scandal mag of their own, running afoul of both their unflattered subjects and a Paige Turner, the bigoted star gossip columnist of the town. This is a book that shines on many levels. Torres combines an intersting plot with interesting characters. Early on we see Harry's frustration as an aspiring writer who submits stories to a true crime pulp, only to be constantly rejected. Harry taps the underclass of Hollywood, the maids and servants to the wealthy and powerful, in order to gather his most damaging gossip, providing a level of social commentary at the base of the plot. Chantler does a great job with both the drama and the action, and his characters are easily distinguished and well drawn in a slightly cartoony style. His also gives the characters a good space to live in, one that invokes well the story's setting. While Scandalous works great with a straight-forward reading as a story of Hollywood, gossip columns and the red scare, it can also be read as a parable for today's press and their chasing of the sensational, as well as their kow-towing to those in power. Torres is not the first to draw parallels between the red scare of the 50's and the current political climate, but that he does so as an undercurrent to an entertaining and engaging story make for a richer reading of this book. A fine job.
Rating: 4 (of 5)

The Originals
by Dave Gibbons
As teenages in a retro-future city, teenagers Lel & Bok want nothing in life other than to join The Originals, a mod gang who are all about style. They get their wish when they help The Originals in a rumble with their arch enemies, The Dirt, a biker gang of ruffians. Of course, once you get what you've always wanted, you discover that there's more you want, and that there are others who want what you have. It's a stylish twist on a classic tale with a dose of violence, and while the plot takes a while to get into full gear, it ends explosively. It's from Dave Gibbons, so you know it's going to look great, and his toned black and white illustration lives up to expectations. Gibbons' storytelling abilities are also in fine form, as he makes ample use of wide panels to give the book a cinematic feel, and his designs do a great job of evoking the retro-Avengers vibe he's going for. This is good comics.
Rating: 4 (of 5)

Besides being known as a comic writer, Greg Rucka also has a career as a novelist, best known for his Atticus Kodiak thrillers. So it makes a certain amount of sense for him to combine his two worlds by writing a novel based on his creator-owned Queen & Country series. This presents us then with two questions: How does A Gentleman's Game work as a spy thriller, and how does it work as an extension of the comic book?

As a spy thriller, it works very well indeed. As the main protagonist, Tara Chase is a great character, highly competant but flawed. The plot is a doozy: following a terrorist attack on the London subway system, Tara's SIS section is called upon to retaliate against the terrorists. I won't spoil the plot any further, except to say that there are a couple of great twists that come just at the right time and are as logical as they are surprising. In fact, one of the greatest joys of the novel is that none of the characters have to act like idiots in order for the story to work. While characters may make bad decisions, they are not stupid decisions. I have no idea how accurate the details and settings of this novel are, but it certainly has the feel of authenticity and that Rucka has done his homework. His prose is detailed but doesn't get bogged down, and he can write action as well as the quieter moments. Given that this is based on a comic with which a majority of the readers will be unfamilar, there is a good deal of info-dumping in the first 50-100 pages to get things set up, but it is integrated into the plot and never feels like a plot summary. 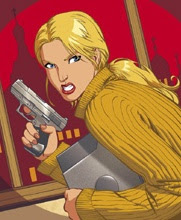 A Gentleman's Game also works well as the next chapter for the Queen & Country series. While it is not necessary to be previously familiar with Tara Chase and the rest of the cast from the comic, fans of the comic will find much here to enjoy. Unlike many novels based on comics where the author has to pretty much put things back in place by the end of the book, since Rucka owns Queen & Country he can do whatever he wants, and by the end of A Gentleman's Game things have definitely changed in Tara's world. Rucka uses the opportunities inherent in the novel format to flesh out Tara's world and to give us insight into her internal life and the lives of those around her. This is a both a deeply personal story and a large plot-driven story; and while it would not have been impossible to tell in comic form, it would have had to have been very different, given the difference in the two mediums.