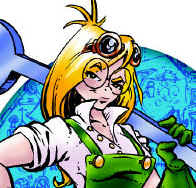 Based on the NCRL list for this week's comics shipping from Diamond, here are a few things to look for at the local comic shop tomorrow:

Antarctic has the collected edition of Rob Espinosa's Courageous Princess; if you've enjoyed Rob's Neotopia, you'll want to pick up the collection of this earlier work in the same vein. Antarctic also has the sixth issue of Ben Dunn's Heaven Sent.

Avatar has the second of Warren Ellis's Aparat one-shots, Quit City, with art by the wonderful Laurenn McCubbin.

Dark Horse has the first issue of Concrete: Human Dilemma.

DC has the fourth issue of Adam Strange, the debut of the once-again-rebooted Legion of Super-Heroes, and the conclusion of Ed Brubaker's Tom Strong two-parter (issue #30).

Viper has the final issue of Daisy Kutter (#4).


Remember when the week between Christmas & New Years was a true skip-week, and DC and Marvel didn't publish any comics? It was a great time to break out of the mold and try an indy comic or two. So even though DC & Marvel are publishing some comics this week, make it a point to try something off the beaten path; give a title from Oni or AiT/PlanetLAR or Slave Labor/Amaze Ink or Fantagraphics or Drawn & Quarterly or Alternative a try. Who knows, you just may find something that you like!

An excellent AiT book to try this week would be Larry's PROOF OF CONCEPT (out on Wednesday), giving you six stories for the price of one. Seven, if you count Kieron's in-betweeners.

How did I miss PROOF OF CONCEPT when I was going through the list? I've been looking forward to that. I must have been distracted by the glory that is GIRL GENIUS.

On indies, I'm really liking what I've seen so far from Arcana Studios, too.