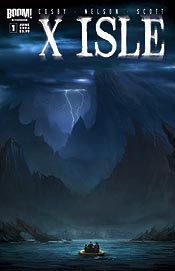 My review copies from Boom! are starting to back up on me. So here are some very quick takes:

What Were They Thinking?! Some People Never Learn: These remix comics cam be amusing, but the novelty is starting to wear thin. There are some amusing bits here, but if this stuff is going to continue, they're going to have to kick it up a notch. 2.5 (of 5)

Hero Squared Ongoing #1: There are lots and lots of words here--good thing that DeMatteis brings to funny more often than not. And the last few pages are silent, so I guess that he used up Boom!'s allotment of word balloons for the month and they ran out. A fun continuation of the mini, and hopefully a plot will kick into gear soon. 3 (of 5)

Tag #1: You'd think that zombie comics would have run their course by now, but Giffen finds a fresh spin to keep things interesting, and Kody Chamberlain has the perfect art style for this comic: inky with a touch of Jae Lee in there. And while a zombie blog may be pandering to all of us comics bloggers, it works. 3 (of 5)

Second Wave: War of the Worlds #3: Too much time is spent in the sewers in the first half of the book, but the art really opens up when the group finally gets out in the open. Still, I want to see the plot move quicker to keep my interest. 2.5 (of 5)

X Isle #1: Take one part Surface, add in some Lost, and you get X Isle. This makes for a good first issue, setting up the situation and establishing the conflicts. Greg Scott supplies the art, and he's improved since his fill-ins on Gotham Central and really makes this book work for him. I want to read more. 3.5 (of 5)

(review copies of these comics were provided by the publisher)
Posted by Dave Carter at 12:29 PM