House of Java
by Mark Murphy
This is a collection of short stories written and drawn by Murphy, most of which have some sort of overt or tenuous connection to coffee. It's all slice-of-life type stuff, which could be boring, but Murphy has a way of making the stories interesting. He uses dialogue and facial expressions to quickly delineate characters and give them depth, allowing us to actually care what happens to the characters even with just knowing them for just a short bit. His artistic style is very raounded and, while a bit clumsy in some places, gets the job done and is for the most part attractive.
Rating: 3.5 (of 5)

Why Did Pete Duel Kill Himself?
by Mark Kalesniko
Pete Duel, in case you're wondering, was the star of the early 70s tv show Alias Smith and Jones. The opening scene of this graphic novel finds Alex, a teenaged dog-headed boy, wondering why a successful adult like Duel would possibly want to committ suicide. We then flashback to episodes in Alex's childhood, and see how Alex, a sensitive child, suffered any number of humiliations big and small and the hands of both kids and adults; those special kinds of humiliations reserved for those who don't quite fit in anywhere. Kalesniko hits the notes perfectly, showing Alex's trials of childhood in anecdotes of various lengths. Alex is the only character who appears with the head of a dog, an interesting metaphorical choice that serves not only to show Alex's alienation, but also affords Kalesniko an palate of expressions to drawn on. Though depressing, this is a strong piece of work.
Rating: 4 (of 5) 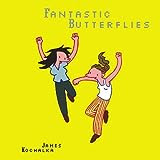 Fantastic Butterflies
by James Kochalka
Probably the thing by Kochalka that I've read that I like best so far. It starts out like a regular ol' boring indy comic, with a melancholy guy and his bitchy girlfriend visiting a friend with cancer, but soon takes a turn for the absurd with a talking dog, time travel, robots and kung-fu fighting. Like much of Kochalka's work it doesn't really have a through plot or make much sense, but it works as a series of incidents strung together. Despite the seriousness of some of the subject matter it has a genuine charm and occasional sense of fun.
Rating: 3 (of 5)

Don't know if you've read AMERICAN ELF yet, but Fantastic Butterflies is like Kochalka's diary strips in a longer narrative form. If you enjoyed FB, you'll LOVE American Elf.

I have read American Elf, or at least parts of it.