Each month (usually...) I go through Previews to highlight twelve items worthy of attention in three categories: Mainstream Comics, Indy Comics, and Collections/GNs.

First up for the August Previews (comics supposedly available in October) are the following dozen mainstream comics picks:

Seven Soldiers #1
(DC, $3.99, p. 87)
Finally Grant Morrison & J. H. Williams III bring the Seven Soldiers event to a close. Will it be worth the wait--I sure hope so. I just hope I can remember what happened in the previous 29 issues...

Tales of the Unexpected #1
(DC, $3.99, p. 89)
I really liked seeing Cliff Chiang's art on the recent Spectre mini. But he's drawing the Dr. Thirteen back-up feature here, not the main Spectre story. Still, anything that give Chiang work is good in my book.

Desolation Jones #7
(DC/WildStorm, $2.99, p. 112)
Warren Ellis is back with more Desolation Jones, and this time he's brough artist Danijel Zezelj along for the ride. Zezelj is an inspired choice; most American's are unfamiliar with his work, and hopefully this gig will expose him to more fans.

The Other Side #1
(DC/Vertigo, $2.99, p. 123)
I'm unfamiliar with writer Jason Aaron, but with Cameron Stewart drawing this war story is sure to at least look really good.

Ultimate Power #1
(Marvel, $2.99, p. M8)
Huh, whadoyaknow--The Supreme Power universe is actually the Utlimate version of the Squadron Supreme. Greg Land photo-references his way through a story by Bendis, Straczynski & Loeb that will probably be good reading when the trade comes out after this nine-issue series concludes.

The Irredeemable Ant-Man #1
(Marvel, $2.99, p. M23)
Will Ant-Man finally be the Marvel series by Robert Kirkman that fans actually want to buy? After the sleeper hit Marvel Zombies, maybe... 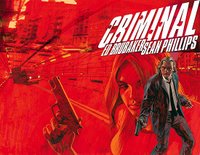 Criminal #1
(Marvel/Icon, $2.99, p. M80)
Ed Brubaker and Sean Phillips get to do hard-boiled crime stories, sans and super-heroes or other such nonsense. This makes me happy.

Angel: Masks
(IDW, $7.49, p. 304)
Angel Puppet returns in one of four Halloween-themed stories in this anthology.


Look for the other two parts, Indy Comics & Collections/GNs, sometime next week.

Wow..a lot of love for Wildstorm/Vertigo/Icon in that post. I can't blame you, though, since those are where most of my picks are, too. It's kind of ironic that all the exciting things from the "mainstream" publishers are their side output.

some good quality stuff there! I'll have to m,ake the effort to get over to the store and pick a few up! and, oddly, not a single mention of civil war. what's up with that? ;-)