Here is today's batch of recommendations/entries for the 100 Comics Giveaway Contest; undiscovered gems of which you may not have been aware:

My pick is Cromartie High School. I don't read any manga, so I was a little wary and unsure when a friend sent me a volume of this series, but I'm really glad they did. It's a completely strange book, about Japanese school boys trying to becoming "badasses" and win fights with other schools, but it's more about making everything ridiculous and out of the ordinary. It's just really, really bizarre. For example, one of the classmates is a robot, who then gets turned into a motorcycle. Another is Freddie Mercury. Yeah, that Freddie Mercury. It's a wonderful and funny series that's includes many things near and dear to my heart, like surreal humor and savage mockery of teenaged boys. Plus there's a gorilla.

I recommend Nausicaä of the Valley of the Wind Parts 1-5 (1988; 27 issues) by Hayao Miyazaki. Miyazaki's fantasy is groundbreaking and revolutionary. It was first published in 1982 in Japan and is even more relevant 24 years later. Honestly, could there be a topic more appropriate theme for today's world than a story about the attempt to create peace between kingdoms torn apart by war, battling over the last of the world's precious natural resources? A story that is at the same time haunting and heartwarming, disturbing and gentle deserves our attention once again. 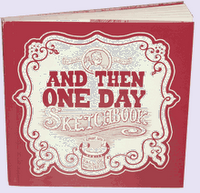 My pick is the clever and classy autobiographical comic And Then One Day... by Rockin' Ryan Claytor (www.elephanteater.com). Ryan bares his soul for the reader with his frank and honest chronicling of his day-to-day life, and he manages to do it with a quirky sense of humor that endears him to the reader. His cute and cartoony art manages to convey his joy in creating the comics you are reading. Ryan is as interested in the production side of creating a comic, and puts a great deal of effort into designing an attractive package for his stories. His latest work, a daily sketchbook diary, is terrific but is sadly his only book currently in print, so hopefully we'll see a collection of his back-catalog in the future. And I am NOT just saying all this because Ryan is a good friend of mine and I occasionally appear in the books.

Chynna Clugston and Ian Shaughnessy's Strangetown. It's basically Twin Peaks done in Rumiko Takahashi style, and the characters are fun and well realized in one issue (which, unfortunately, is all they've put out so far). So people should read it, and hope for more.

I'm going with Amanda and Gunn (by Jimmie Robinson), published via Image. This is in the same 'universe' as CyberZone, and involves a semi-distopic techno-future. I, meanwhile, have never read CyberZone, and liked Amanda & Gunn because it was funny at one moment and emotionally affecting the next. It had solid art, solid characterization, and surprised me in ways many comics don't. The fact that the protagonist is an African-American lesbian is just icing on the cake.

My recommendation is the 2004 Veitch/Edwards Question mini series. It's a really interesting revamp of the character, making him a TV reporter with shamanistic powers who interacts with Superman and Lois Lane - I'm pretty disappointed that it's all being retconned by 52, but what are you gonna do.

Thanks to everyone for your recommendations; you have all been entered into the drawing for the 100 Comics Grand Prize. There's still time for you to enter, but be sure to do so before Tuesday at 6pm EDT!