Here is the next batch of recommendations/entries for the 100 Comics Giveaway Contest; undiscovered gems of which you may not have been aware: 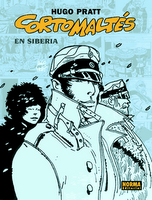 I nominate Corto Maltese in Siberia. This comic by the late European Comics great Hugo Pratt follows the adventures of his seafaring protagonist Corto Maltese as he searches for treasure and ends up getting involved in some of the conflicts shaking up Russia and China following World War I. Pratt exhaustively researched his historical facts and it shows as there is a mixture of real life and fictional characters that feels entirely plausible. It highlights a part of history that we ignore here in a America all to often choosing instead to focus on World War II. This was a very important time in history when the old colonial powers were breaking down and the new players on the world stage were coming into being. Smack dab in the middle is Corto Maltese, Everyone needs to read some more Hugo Pratt.

Gødland by Joe Casey and Tom Scioli (Image). Remember the days when a lot happened in a single comic issue? In this day of "decompressed" story telling one may marvel at the stunning artwork while waiting for something substantial to happend for several issues. You don't find that in Gødland. In this Kirbyesque tribute to the cosmic tales of the 70's, characters are introduced one right after another. World shaking events occur like wildfire. While nostalgic, it is more than pastiche. One finds humor and social commentary while enjoying an old-school comic style. If you haven't read it, what are you waiting for? 'Nuff said!

And from Daniel Taylor:

Girls, by The Luna Brothers. Because, jaded as I am from decades of reading comics, this one takes my breath away at least once in every issue. They're fifteen issues into the series (if it's limited, I haven't heard how many issues it's expected to run) and I still have no idea where this story's going. But it's full of characters I can't help but care about.

Thanks to Christopher, Andrew, and Daniel for their recommendations; all three have been entered into the drawing for the 100 Comics Grand Prize. For those of you keeping track, that makes 10 entires, which means there will be at least one runner-up prize as well. There's still time for you to enter!

The "Girls"-comic.
I've seen it and bought the second trade for the art.
Haven't read it, 'cause I've ordered the first trade.

Beautiful art by the Luna Brothers.
I've alse bought "Ultra" and "Spiderwoman: Origin" by them.