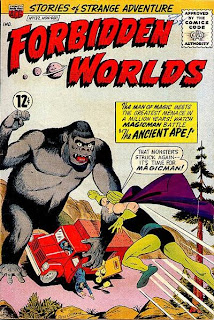 Today's cover is Forbidden Worlds #132, from November 1965. The cover by Kurt Schaffenberger (as Pete Costanza) features Magicman going into battle against The Ancient Ape, who apparently has a penchant for armored car robberies.

Image courtesy of the GCD. Click on the image for a larger version.
Posted by Dave Carter at 1:43 PM