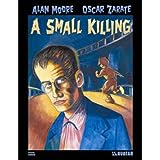 A Small Killing
by Alan Moore & Oscar Zarate
Adman Timothy Hole has just landed a major Russian account. On his way to Russia he stops off in his home country, England, and the past comes back to haunt him; not just in the remembering of his mistakes and failures, but also in the preseance of the vision of a demonic child that only Tim can see, and who seems to be trying to kill him. In the end it's not much of a mystery, but it is cleverly constructed and does manage to evoke a solid emotional response. As Tim devolves into paranoia, we are brought right along with him through the pacing and the art.
Rating: 3.5 (of 5)

Top Ten: The Forty-Niners
by Alan Moore & Gene Ha
Journey with us now back to 1949, when Neopolis was still young and being populated by science heroes, now that the world had no real use for them after the war. Moore tells several interweaving narratives about the early days of the city, from the struggles of a young police department against organized vampire crime to the struggles of the new immigrants trying to adjust to life after war. The art by Ha and colorist Art Lyon is wonderful, fully evoking the feel of the past butting up against a gleeming future. Each page is packed not only with mood but also with small details that really make this book come alive. It's a story both epic in scope and human in its details, and along with the art is well worth the deluxe hardcover treatment.
Rating: 4 (of 5)
Posted by Dave Carter at 8:27 AM

Can't wait to read The Forty-Niners.

What are your expectations for the new DiFilippo/Ordway Top 10 book?