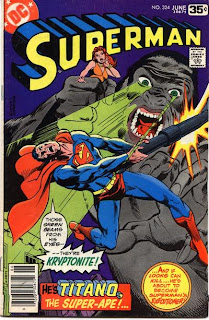 Today's cover is Superman #324, from June 1978. The cover by Rich Buckler and Dick Giordano features the origin of Titano, the giant ape who shoots deadly beams of Kryptoniite from his eyes. Beams of Kryptonite. From his eyes. A giant ape. Man, that's just beautiful. This same comic story (writeen by Martin Pasko) also features the Atomic Skull, and the Supermobile. That's right, the Supermobile. This surely must be one of the greatest comics of all time!

Image courtesy of the GCD. Click on the image for a larger version.
Posted by Dave Carter at 7:03 PM