Back in June when the new DCU titles (aka DCnU) were announced, I ranked all 52 titles on my likelihood of buying them. As it turns out, my comic shop was offering a deal such that if I pre-orderd all 52 #1's, they'd be 50% off. So, I pre-ordered them all. Only fair then to look back and see if my initial assessments hold up. My plan is to review each of the new titles as they come out, starting with: 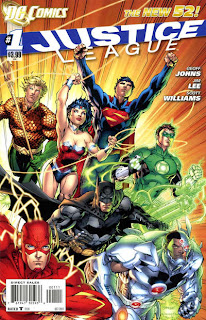 Original rank/assessment: 5 (Definitely Yes). I've bought every regular JL comic since the 80s, and this big-guns approach with Johns & Lee looks to be what I'm after in a JL comic.

As it turns out, not exactly what I'm looking for after all. We're getting an original story of the new Justice League, set five years in the past. Which is fine as far as it goes, but it is starting off much too slowly. The only way we know that Flash, Aquaman and Wonder Woman will be on the team is that they appear on the cover. It's mostly a Batman and Green Lantern team-up, with the heroes first fighting, then teaming-up, while posturing as to who is tougher/more qualified. Superman zips in for a last-page reveal, and Cyborg is seen only as a pre-transformation Vic Stone. (Which would imply that Cyborg's origin story will now be tied to the Justice League, rather than to the Teen Titans...) I keep thinking that opening with a multi-part flashback origin story was perhaps not the smartest move for the DCnU's flagship title. Instead, why not have the present day team fighting a global menace, like the Justice League is supposed to do? You can always flash back to the original later. It was a perfectly fine comic, about the base level that you would expect from Johns and Lee; but I was hoping for more bang from my four bucks.