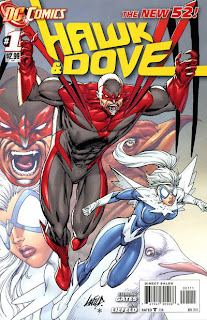 Original Rank/Assessment: 20 (Maybe/Provisional) - It'll be a race to see whether this or Batman: The Dark Knight is the first DCnU title to fall behind.

Of all the the DCnU titles, this one perhaps raised the most eyebrows when first announced. Writer Sterling Gates (of Morning Glories Supergirl fame) teaming up with critical punching bag Rob Liefeld, on Liefeld's return to the characters that marked his entry into comics way back in 1988. And it is pretty much what one would expect. All of Liefeld's artistic sensibilities are on display, from posing action shots to interesting anatomical choices. You know by now if you like it or not (and there is a non-trivial segment of the comics buying population that likes it quite a lot). Gates's story does the job, opening with an action set piece, then moving into exposition and adding in a couple of mysteries. Basically, this is exactly the comic it set out to be, and that you were probably expecting. 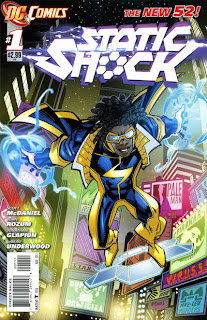 Original Rank/Assessment: 9 (Yes, with Reservations) - One of my favorite Milestone characters. I wish Rozum were still doing Xombi, but hey, I'll take what I can get.

Along with Xombi & Icon, Static was one of my favorite of the old Milestone line. Now he is lightly integrated into the new DCU; so lightly in fact that this could easily follow right on the old Static series with no trouble at all. Virgil "Static" Hawkins has relocated to NYC with his family, and with funding/support from Hardware is continuing his super-hero ways. I'm not a fan of Static's new costume, but other than that the art is vibrant and alive in the way that you want for a comic about an electricity-based super. Let's just hope that the last-page 'shocker' is simply a ruse, because otherwise that's one aspect of the old DCU sensibility-of-late that I don't want to see in the new DC, especially Static.

Oops. Thanks for the catch. Corrected.

You know, I think the world needs Rob Liefeld. If only to remind us what comics COULD be like if we don't appreciate good artists while we have them. Plus, it's just great for entertainment value. It's also good for people like me, who want to be comic artist, but don't think they're good enough. I like to see Liefeld getting work for that reason.