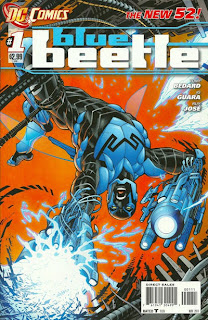 Original Rank/Assessment: 13 (Yes, with Reservations) - Glad to see Jaime Reyes given another go. If the new creative team can recapture the charm of the original, this this will be a winner.

I'm not sure we needed to go back to the beginning with Blue Beetle. Sure, his origin story was tied in with the likely-no-longer-cannon Infinite Crisis, but those bits are easily ignored. I'd rather that this series pick up where the previous series (and the Booster Gold back-ups) left off rather than retreading the old stuff. But that said, this is still mildly good. It could do with a little more of the aforementioned charm, like some of the witty repartee that Jaime had with his friends, but for an origin story it does the job. The art is pretty good though it struggles at times on the edge of being too busy, and at times the orange coloring overwhelms. Still, worth sticking around for a few issues to see where it goes (hopefuly quickly away from the origin!) 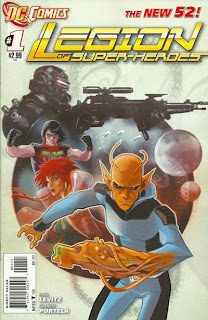 Original Rank/Assessment: 16 (Yes, with Reservations) - Looks like business as usual, so I'll likely stick around for a while.

How many #1s does this make for the Legion? I've lost count. And since the Legion tends to do its reboots at times when it doesn't renumber, this is pretty much a continuation of the previous Legion's iteration, though it appears that some time has passed since last month's issue. The effect is that out of all of the New 52, this is probably the most hostile to new readers. But then that has always been the case with the Legion: when I started reading it back in the 80s there was a huge cast of characters and tons of back story. I managed to deal with it back then, and I suppose new readers will manage now (on the plus side they have the Internet & Wikipedia; on the minus side, they have to deal with multiple reboots!) This is the classic 'for those of you who like this sort of thing, this is the sort of thing you'll like' comic. Portela's art is nice and at times very busy, but luckily Javier Mena's coloring saves it in places where it otherwise would be hard to distinguish what is happening. And a few more body types would be nice—do Chameleon Boy & Brainiac 5 really need to be so buff? (And a shout-out to the cover by Karl Kerschl, which has an appropriately sci-fi paperback vibe.)