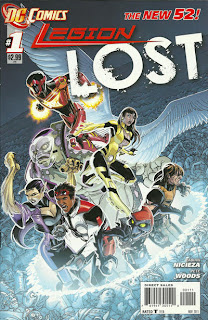 Original Rank/Assessment: 26 (Maybe/Provisional) - Yet another Legion in their past/our present story? But I like Pete Woods, so I'll check it out.

The set-up has been done before: members of the Legion of Super-Heroes travel back in time to the present day and find themselves trapped here. So it all comes down to the execution. This time around, the Legionnaires are after a time-traveling terrorist with a bio-weapon, and they find that their futuristic technology is for unknown reasons failing. I'm not sure how new readers will react to the introductions of these mostly second-tier Legionnaires, but as I've been reading Legion stories for nearly thirty years I didn't have any difficulties. Fabian Nicieza has never been one of the most exciting comics writers, but he always turns in a solid super-hero story and does the same here. Pete Woods seems to have modified his style a bit here with his lines seeming somewhat thicker than I remember, but he's still a very good storyteller. So this is pretty much what I expected, though I'm not sure how long the premise will be able to hold up. 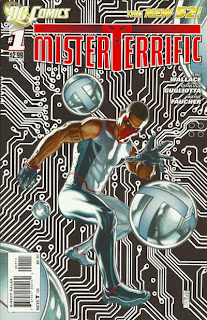 
Original Rank/Assessment: 22 (Maybe/Provisional) - Like the character and the idea of his headlining a series, not too enthused by what I've seen from writer Eric Wallace in the past.

I was interested to see how the modern Mister Terrific would work outside of his context as a JSA legacy character. Then Karen Starr (formerly the secret identity of Power Girl, anothehr JSA'er) showed up, and it started me thinking: We know that DC have a Justice Society comic in the works, set on a new version of the alternate Earth-2. What if this new Mister Terrific comic is also set on Earth-2, and they just haven't explicitly cued us in on that fact? There's nothing here to indicate that it is set on the same world as all of the other DCnU titles. And then there's the gold DC Comics logo on the cover, different from any of the other logos (Gold = Golden Age = JSA ???) It makes me wonder if DC are being sneaky here... As for the comic itself, I think it's an odd choice to have your main character become a mind-controlled pawn in his first issue, and I'm not enthused by Gugliotta's art, which I find to be quite inconsistent. But I still fundamentally like the character so I'll stick around for a couple more issues to see how things progress. 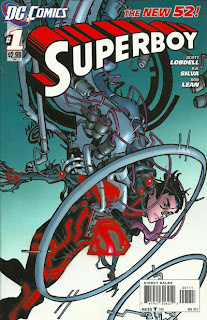 Original Rank/Assessment: 43 (Probably Not) - Looks like they're throwing away all the Superboy continuity. I really liked with Jeff Lemire was doing with the character, so this looks like a huge step back. The new creative team doesn't much appeal either.

Another comic that turned out better than I thought it would. I still think it's sad that Lemire's Superboy comic was cut short by the coming of the new DCU. But getting over that and viewing this new Superboy comic on its own terms, it comes off surprisingly well. Fundamentally we still have Superboy as a vat-grown clone combining Superman & Lex Luthor's DNA, but his origin jettisons the original's "Death of Superman" tie-in and is now more closely aligning with that of the Superboy from the current Young Justice cartoon. And I was wrong is my assessment of the creative team as well. Lobdell's story does a good job of introducing the situation and characters and even pulls off an effective fake-out in the middle section. I also like the clean look of the art from Silva & Lean and the colors from the Horries blend well with the line art. So while I'm still not completely sold and it could go wring when Superboy is finally released into the outside world, I like what I see so far.