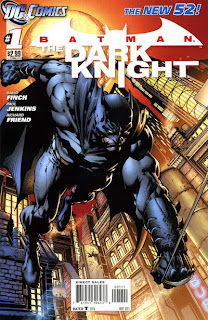 Original Rank/Assessment: 44 (Probably Not) - Haven't really cared much for Finch on this title the first time around. Then again, committing to this title would only mean buying two or three issues a year...

On the positive side, adding Paul Jenkins as the scripter definitely improves the dialog, and as a co-plotter with Finch on future issues that may help to keep this book on a timely schedule (though I see many fill-ins in its future...) Unfortunately, this comic just seems tired. Yet another Arkham breakout? Haven't see already seen that at least twice in Batman comics this month? And re-casting Two-Face into a musclebound bruiser is kind of missing the point of the character. The art is stiff, as Finch seems more interested in drawing characters making poses instead of inhabiting real space, and the colors seem both uneven and overdone. I know that Finch is a hot commodity, but this is the least of the Batman-starring comics in the New 52. 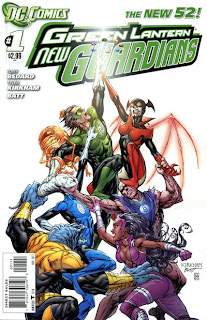 
We open with a seven-page flashback to Kyle Raynor's origin story, which at ⅓ of the comic seems like a bit much. Maybe it will pay off as the story progresses, but surely the point could have been made in three pages. When we finally get to the present day, we find random rainbow lanterns being 'decommissioned' as their rings fly away at in-opportune times, and discover that the rings are all traveling to Earth to become attached to Kyle, with angry lanterns then arriving intent on beating him up to get back the rings. I'm not much of a fan of Kirkham, but his art is okay here (although if you are going to draw a zipper on the front of Fatality's Star Saphire uniform, maybe she could use it and zip up?) I'm struggling to say anything more about this comic other than just recapping the plot points, which probably isn't a good sign...