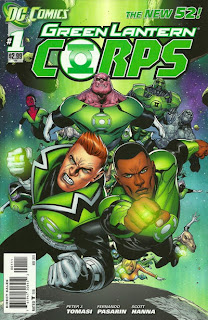 Original Rank/Assessment: 15 (Yes, with Reservations) - Looks like business as usual, so I'll likely stick around for a while.

This comic opens with a four-page scene of graphic death and dismemberment, and ends with genocide and graphic disembowelment. Is this really what DC thinks we want from a Green Lantern comic book? The stuff in the middle is somewhat interesting, with both Guy Gardner and John Stewart learning that it is nigh impossible to have a normal life on Earth when their status as Green Lanterns is so well-known. The art by Pasarin & Hanna is richly detailed and nice (when it isn't showing Lanterns bloodily losing their heads and other body parts). But the first and last impressions that this comic gives are of needless graphic violence, the kind that I had hoped that the new DCU would be leaving behind, but by week three now I see that my hopes were misguided, and the chances of my sticking around with this and similar books are slim. 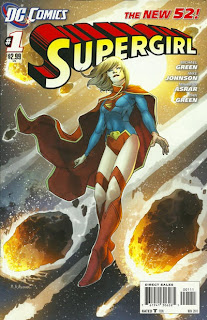 Original Rank/Assessment: 23 (Maybe/Provisional) - Not sure about the reboot here, but I've liked Green & Johnson's work on Superman/Batman, so this book gets the benefit of the doubt for now.

The newly-arrived Supergirl's rocket crashes on Earth (or rather, through Earth) and ends up in Russia, where she fights some guys in battle armor while carrying on a cryptic internal monologue, until Superman shows up on the last page. The biggest problem with this comic is that it reads way too fast. It poses—or rather hints at—a lot of questions about this new version of Supergirl, but at the end she's just as much a cipher as she was at the beginning. This is surprising coming from Green & Johnson, whose previous run on Superman/Batman often packed a lot of story into its pages. Supergirl so far gets an incomplete and it had better demonstrate quickly why I should continue to be interested.