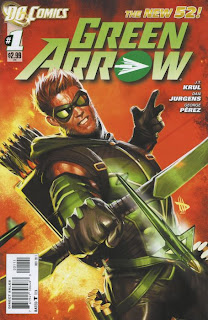 Original Rank/Assessment: 51 (Definitely No) - One of my least favorite writers on a character I could care less about.

I'm not much of a Green Arrow fan. I'll read the comic if there's a creator working on it that I like, but that's as far as my affection for the character goes. I've also never cared much for J.T. Krul's writing, and this comic didn't do anything to change my mind. Our DCnU Green Arrow Oliver Queen is still in his early wealthy stage, in charge of Queen Industries though having to answer to a hostile board. He's moonlighting as a super-hero with a bow. He fights a group of one-dimensional villains for some reason. A different group of interchangeable bad guys shows up at the end. It's all very rote and by-the-numbers. On the plus side, the art by Jurgens & Pérez is highly competent and nice to look at; it carries the story well, what little there is of it. But nice art isn't enough to save this from being dull. 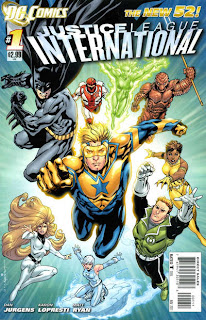 Original Rank/Assessment: 6 (Definitely Yes) - A return to my second-favorite JL era, with Aaron Lopresti on art, makes for a winning combination.