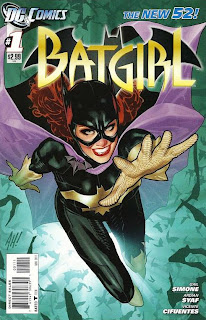 Original Rank/Assessment: 7 (Yes, with Reservations) - Yes, I wish she were still Oracle as much as the rest of you. But I will read a Gail Simone Batgirl comic staring Barbara Gordon.

Of all of the New 52 comics, this is the one that has received the most pre-publication scrutiny, with disfavor coming from fans of both the former Batgirl Stephanie Brown (or even Cassandra Cain) and of Barbara Gordon's previous incarnation as Oracle. I doubt that either of those contingents will be mollified here, as both the previous Batgirls and Gordon's Oracle career appear to have been erased in the reboot timeline squeeze. What we are left with is a comic that tries to accomplish a lot: setting of Barbara's new status quo, explaining her back story & her miraculous healing, setting up a new threat in the villain Mirror, and including plenty of action. It makes for a very cramped twenty pages, with density often appearing where clarity instead is called for. But we'll see where it goes from here. 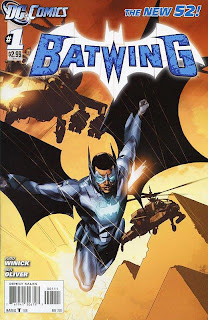 Original Rank/Assessment: 25 (Maybe/Provisional) - 'The Batman of Africa' could be a good concept, but I'm not sure that Winick is the best choice for it.

Though previously introduced a few months ago in Batman Inc.,  Batwing is essentially a brand new character, one of the few headlining a title in the New 52. As such, Winick doesn't need to worry about cuing us in on what is and isn't continuity and can get right into introducing Batwing and his world. And it's a dangerous one, in which insurgents and revolutionaries and military dictatorships battle with little regard to the civilians caught in the crossfire. It could make for some interesting stories. But I'm unhappy with the level of graphic violence displayed in the ending, which smacks of the worst excesses of the recent DCU (i.e. beheadings and swords through the chest, with plenty of blood on display). Oliver's art is a pseudo photo-realistic style that is in vogue with many, but sacrifices storytelling clarity. I want this book to be better. 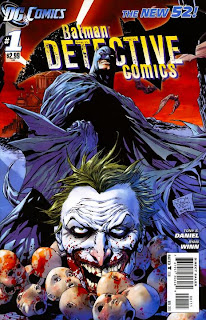 Original Rank/Assessment: 34 (Maybe/Provisional) - I've been floating along with Daniel's work on Batman, but this may be a good place to drop off.

I suppose that the DCnU could have gone in a different direction with The Joker; there have been so many different interpretations over the years and this would have been the perfect excuse to try something different and unexpected. Instead, this is the same old Joker as maniacal serial killer that has been on display for the past couple of decades. A shame really, because it is getting quite old. Artwise, Daniel seems to kick it up a notch: his action scenes are mostly followable and he mixes up large and small panels to effectively control the pacing. It's better than I thought it would be, and I'll admit that the shocking ending, while unnecessarily gory, has me curious as to what will happen next. So mission accomplished, but this title is on very thin ice with me.