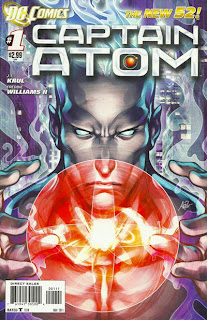 Original Rank/Assessment: 42 (Probably Not) - I like the character and have very fond memories of the old Cary Bates series. But I don't care much for either creator.

This comic has a lot going against it from the outset: based on an ill-defined Charlton character steeped in the atomic age and the cold war era; competing against the well-regarded 80s comic by Bates & Broderick; a character much mis-used every since the early 90s Armageddon 2001 crossover; and standing in the long shadow of Watchmen's Dr. Manhattan. So the creators had their work cut out for them. Capt. Atom is apparently gaining powers, becoming more like DC's other atomic age super-hero, Firestorm; and at the same time losing control of those powers. The comic is mostly set-up for a new status quo, but then at the end appears to be throwing that status quo aside. Williams is using a different art style than I remember seeing from him in the past. I like it, but at the same time I'm not sure that it fits exactly with the story and character; I feel that a comic about a shiny atomic-powered super-hero should be more slick and polished. I think I'll need to see another issue before making up my mind on this one. 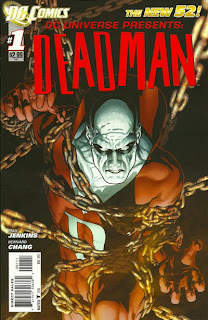 Original Rank/Assessment: 32 (Maybe/Provisional) - Paul Jenkins' super-hero stuff normally leaves me a bit cold, but Deadman may be a good character for him. We'll see...

Deadman is also a hard character to write a comic around, being defined more by his power and state-of-existence than any particular personality. So in a sense he is a clean slate, open to interpretation for whatever sort of story the creators want to tell. Jenkins and Chang's take is a man beset with ennui, and they appear to want to tackle questions relating to no lesser mystery than the nature of life and death. Thankfully they appear to be up to the task. The story and art are clean and clear, and by the end of the issue we have a good idea of how they are going to interpret Boston Brand and what sort of comic this is going to be. It is densely packed, but not to the detriment of clear storytelling. In fact, there are some pages here that seem to take just as long to read as the entire issue of this week's Supergirl. I want to see where Jenkins & Chang are taking this story next. 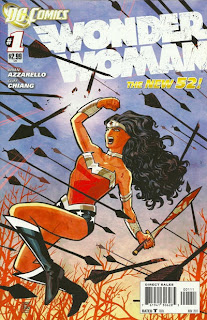 Original Rank/Assessment: 11 (Yes, with Reservations) - Normally Cliff Chiang drawing anything is an automatic yes, but I'm usually disappointed in Azzarello in general and his super-hero stuff in particular. But, when Azzarello & Chiang got together for Doctor 13, it was wonderful, so I'll hope for the same magic again here.

Yet another difficult character to write, Wonder Woman has had so many different permutations and characterizations over the years, and her status as the preeminent female super-hero is a minefield wrought with potential pitfalls. Azzarello & Chiang have elected to go their own way, giving us a dark tale that has a lot of action and is steeped in mythology. While not the approach that I would necessarily want, it is certainly a valid take on the character, and they do it very well. Wonder Woman's character isn't completely delineated at this point, but there's enough here that we can tell that she has a character and I have no doubt that it will be fleshed out as the series progresses. Cliff Chiang is one of my favorite artists working day so I'll follow him to just about anything, and it's a bonus when he is given something this good to draw.


(And a final note for this week: given that these three comics all have a golden DC Comics logo, it appears I was wrong about that being a clue as to Mr. Terrific's Earth-2-ness. Not that I'm completely wrong about the conclusion, but that bit obviously isn't a clue in that direction...)
Posted by Dave Carter at 5:26 AM