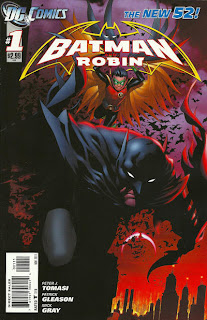 Original Rank/Assessment: 24 (Maybe/Provisional) - If this can maintain the punch and action I expect, then I'll stick around.

The last time we had a first issue of Batman and Robin it was by Morrison & Quitely, and they quite simply knocked my socks off. Tomasi & Gleason can't match that, but then I wasn't really expecting them to. They do perfectly fine job here, establishing the plot and characters and the new status quo while inserting plenty of action. However, I found the coloring to be too dark (yes, even for a Batman title!) And a plot point bothered me: While Gleason was absolutely correct to depict the research reactor at Gotham U. as a swimming pool reactor (I visited the one in the building next door to where I work, back before they dismantled it a few years ago...), there's a reason why security is light at such reactors: there is nothing there worth stealing! That aside, I'm interested enough to stick around through the first arc; after that, we'll see. 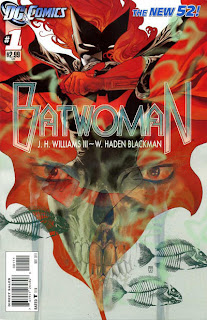 Original Rank/Assessment:  3 (Definitely Yes) - Finally! And with Williams switching off story arcs with Amy Reeder, this will likely be the best looking book on DC's slate.

One of the most anticipated of the New 52, the first issue of Batwoman finally sees the light of day after several delays. A handful of changes will obviously have to be made to align the story with the new reality; the most major here being the recasting of Maggie Sawyer from a captain to just a detective, which should change the dynamics of her relationship with Kate Kane somewhat. Oddly other key plot points are not adjusted, notably Bette's former career as a Teen Titan. It's probably best to just ignore such things and go with it. Last month the book our graphic narrative discussion group discussed by Batwoman: Elegy, and while I liked it a lot before we discussed it, after our discussion I really really liked it. That book had layers and there was plenty to sink our teeth into. So I was very interested to see how Willaims & Blackman would do taking over the writing duties from Rucka. They do a good job. It won't be the same book as it would have been with Rucka at the helm, but it still looks fantastic and is easily one of the strong entries in the DCnU. So far so good, and I have no reason to expect anything less from the forthcoming issues.

The serie début was great and surprising.