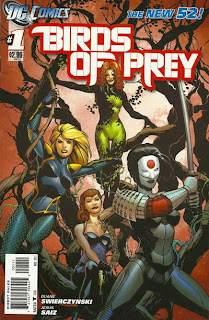 Original Rank/Assessment: 48 (Definitely No) - I've bought every single issue of BoP up to this point. And now? Ugh.

Through all its iterations, Birds of Prey has long been one of my favorite super-hero titles.  But Swierczynski seems intent on turning it into a generic action title whose only defining feature is that it stars a group of women, only two of whom actually show up in the debut issue. Saiz's art is okay but fairly generic; he only seems to draw one female body type, which is a problem in an all-female team book, and his action scenes are stiff and at times hard to follow. Of the three comics in the post it is the best, but that's really damning with the faintest of praise. 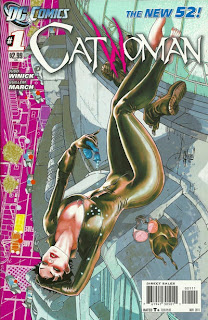 Original Rank/Assessment: 41 (Probably Not) - The cover indicates that this is everything I don't want in a Catwoman comic.


Well, you can't fault DC for false advertising. The cover promises a comic that revels in exploitation, and it certainly delivers. Unfortunately, my preferences in a Catwoman comic run in the Ed Brubaker/Darwyn Cooke mode, and this is about as far from that as you can get. There are actually about three pages of pretty good comics here, but those are far outweighed by the seventeen other pages of exploitative nonsense. Which is a shame, as it shows that the creators are capable of producing a much better Catwoman comic; they just choose not to. 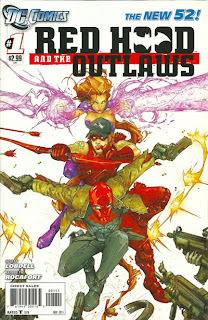 Red Hood and the Outlaws #1
by Scott Lobdell & Kenneth Rocafort

After Lobdell's surprisingly interesting turn on Superboy last week, I held out the slimmest of hopes that maybe I was wrong about this comic. I needn't have worried, as this turns out to be just about as bad as I thought it would be. I've never cared about the Red Hood, rarely cared about Roy Harper, the Starfire here is far removed from the previous iteration and high on the 'ick' factor, and who the heck is Essence and why should I care? If there's any bright spot here, it's that Rocafort is trying to do some interesting things with the opening action sequence, which zings with kinetic energy. It's for Rocafort's efforts that the extra 0.5 point exists in the rating: