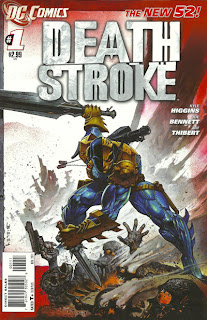 One of the charms of the old version of Deathstroke is that while Slade Wilson was an assassin-for-hire, he also fancied himself a gentleman and worked by a code of ethics. This DCnU version seems to jettisoned all of that, leaving Slade as simply a cold-blooded killer. Maybe they're eventually working their way to Slade changing what he is, but what we're left with now is a comic that just revels in violence with a protagonist who is as uninteresting and he is uncharming. There may be some who want to read this sort of comic, but I suspect even they will find this particular comic lacking. 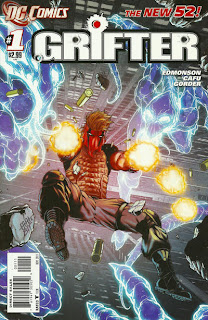 Original Rank/Assessment:  40 (Probably Not) - Nothing much exciting here for this Wildstorm transplant.

Cole Cash is a former special forces soldier turned confidence man, now seemingly haunted by the voices of mysterious creatures (Daemonites?) who are hunting him for unknown reasons. There's plenty of action and some exposition, though I had some troubles following the transitions. This could evolve into an interesting title if they decide to focus on Cash's con man side, but it's not quite there yet. In the 'protagonists who carry guns and shoot people' it's miles ahead of Deathstroke (but that's fairly easy to do). 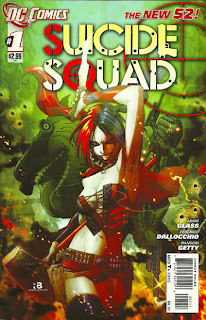 Original Rank/Assessment:  37 (Maybe/Provisional) - One of my favorite high-concepts ever in comics returns, but everything about that cover screams at me to stay away.

Another comic that seems to revel in violence, in this case torture, shootings, people being burned alive, etc. Granted, we're talking about bad guys doing bad things and having bad things done to them, but that seems a thin excuse. The Suicide Squad's core concept, villains enlisted against their will to work for the state, is one that is ripe with conflict and potential. But so far this new iteration seems to be throwing all that potential away in favor of an excuse for violence. And I haven't even touched on the unnecessary visual changes to Harley Quinn & Amanda Waller; others have already taken care of those angles so I won't dwell on them here. If you're looking for a good version of the Suicide Squad, go dig out the old John Ostrander-written issues; or go buy Marvel's Thunderbolts, where Jeff Parker has taken the SS concept to the Marvel universe nearly whole-cloth, but at least understands it's potential and how to use it. So far, DC's new Suicide Squad is failing.