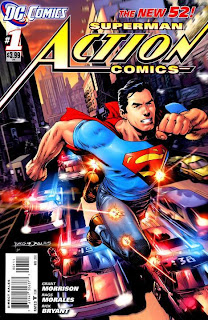 Original Rank/Assessment: 1 (Definitely Yes) - They had me at Grant Morrison + Superman.

Of all of the New 52 relaunch titles, this is the one which had me the most excited. Grant Morrison's All-Star Superman (with Frank Quitely) is in my opinion the best super-hero comic of the past twenty years. So Morrison's new take on Superman has a lot to live up to. Thankfully, it mostly does.

It is tempting to compare Action to All-Star; where the later presented a Superman at the end of his career, Action starts the story in Superman's early days. All-Star was an ode to the silver-age Superman, while Action draws upon Superman's earliest golden-age adventures for inspiration. But I think that such comparisons at this point are a bit premature; All-Star is a completed work, while Action is just the first issue in what is meant to be the foundation of a new mythology for the Man of Steel.

True to its name, Action Comics has plenty of action. A young Clark Kent is new to Metropolis, and is committed to fighting injustice, both as a would-be hero-of-the-people and as a crusading reporter for the Daily Star. We get introduced to Kent, as well as his best friend Jimmy Olsen and Olsen's boss Lois Lane, both of whom work at the rival Daily Planet. We also get a glimpse of Lex Luthor, who is working with a homeland security-type organization to try to bring the brash young hero down.

What we don't get is an origin story. In All-Star, Morrison covered the well-known origin of Superman in just one page. In Action, he dispenses with it entirely. This is good. If any super-hero's origin is well-known, it is Superman's. Instead we are thrown right into the action, drawn with dynamism by Morales, in an escapade that could have come right out of one of Superman's earliest stories by Siegel and Shuster in the original Action Comics.

In fact, keep your copy of the first volume of The Superman Chronicles handy, as there are and I presume will continue to be many allusions and call-backs to those formative stories of the late 1930s. Those were the days when this country was straining to climb out of the great depression, and there was still great mistrust in politicians, corporations, bankers, etc. Not a completely analogous situation to today's America, but not far off either. And thus we get a Superman for our times, a crusader who stands for truth and justice. Every generation gets the Superman it needs; and Morrison is giving us ours.