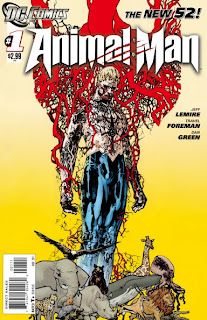 Original Rank/Assessment: 8 (Yes, with Reservations) - Every Animal Man take since Morrison's has disappointed, but I have hopes for Jeff Lemire giving it a shot.

See, now this is how you re-establish a long-running character in a new issue. Lemire doesn't completely ignore all the past iterations of Animal Man, but efficiently cues us in on what parts of Buddy Baker's past he deems important, while getting us comfortable with the character's current status quo and setting up the future conflicts. Fans of the previous Vertigo-esque versions of Animal Man will be fine, even though the spandex is back; while his recent outer space adventures are mentioned in passing but can likely be safely ignored. Some may not find Foreman & Green's art to their liking, but I find the loose and thin-lined art to be fitting. Also, note how Foreman uses negative space and the lack thereof to reflecy the different facets of Buddy's life: his scenes at home are open, while as a super-hero the panels are more crowded, and the bits in the dreamscape are mushed together and off-kilter. Then there is Lovern Kindzierski's colors, with a subtle blue & yellow palate that echo Animal Man's traditional costume colors. This is an Animal Man comic I want to read. 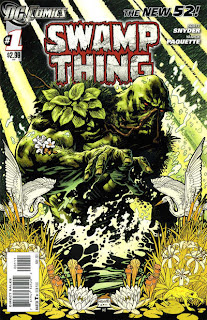 Original Rank/Assessment:  18 (Yes, with Reservations) - Not completely sold on the reboot premise, but I like the creative team.

Just in case you missed it at the end of Brightest Day or in the 3-issue BD Aftermath, Swamp Thing and Alec Holland are now separated, and this is bad for the green. Snyder & Paquette spend most of this first issue setting this all up once again, though thankfully they are more efficient at it than the dragged-out Aftermath. This will have to be considered a work-in-progress until we see what they do with Swamp Thing now that the preliminaries are out of the way. I'm still optimistic, though still cautiously as well.

Thanks for the review. I've been considering picking these two up and it's good to hear people are enjoying them.