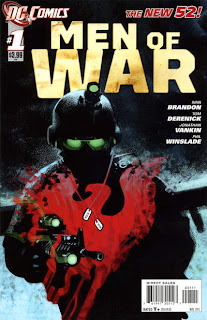 Original Rank/Assessment:  39 (Probably Not) - I think I'd rather see this as a straight war comic without the super-hero-y stuff.

I'm not much of a fan of war comics; if it's not written by Garth Ennis or drawn by Joe Kubert (or features a Haunted Tank or a G.I. Robot) it doesn't hold much appeal to me. And true to form this didn't hold much appeal to me. The grandson of the classic WWII character Sgt. Rock argues with superiors and leads an ill-fated combat mission against an unknown meta-human. The story in the back-up, featuring Navy Seals, is even less inspired, though I really like the style of art that Winslade is using. It's all competently done, and I'm glad that a comic like this has a place in the New 52, but it's really just not for me. 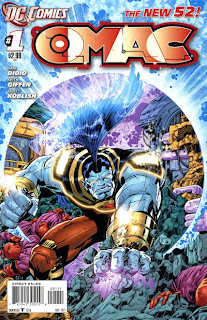 Original Rank/Assessment:  27 (Maybe/Provisional) - Giffen co-writing and drawing bumps a concept I normally wouldn't care about up into the provisional category.

This was a nice surprise. A comic like this rises and falls on the execution, and Didio & Giffen pull it off nicely. On paper I shouldn't like this much; it's just a big rampage by a mostly-mindless hulk-like O.M.A.C., but Didio & Giffen effectively use the action to introduce us to all of the central concepts in the series. Giffen adds just enough Kirbyness to his art to give it an extra dose of vitality, and the colors by Hi-Fi really pop. It remains to be seen how the concept will work as an ongoing series, but for a first issue it sets the tables nicely and has me wanting more. 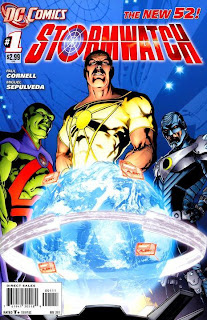 Original Rank/Assessment:  21 (Maybe/Provisional) - Cornell has yet to let me down, but I really don't see this Wildstorm concept fitting in to the DCnU, and Martian Manhunter seems like a really odd fit.

I really need to have more faith in Cornell; I didn't think the concept would work, but he pulls it off. We learn that Stormwatch is a secret society, protecting Earth from all sorts of unseen enemies over the centuries. And in this setting,  the Martian Manhunter fits in perfectly. We only get to briefly know each of the characters, but it works as an introductory issue. It also looks like the menaces they face will be sufficiently big and out-there to warrant the group's existence. I'm in.