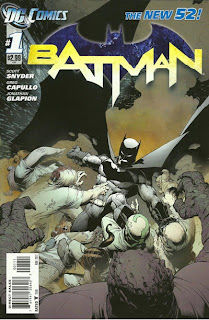 Original Rank/Assessment: 17 (Yes, with Reservations) - I've really liked Snyder's writing on Detective as of late; I just wish he was being teamed with his 'Tec cohorts Jock and/or Francesco Francavilla here as well (I can take or leave Capullo).

So far, this first issue of Batman is one of the best surprises of the DCnU. I was expecting to like the story, having been greatly impressed by Snyder's previous work on Detective Comics. But he manages to step it up another notch here, giving us a great introductory issue with plenty of action and a few nifty ideas, like the holographic portable Bat-Cave. His Batman is still a creature of the night, but he's not all brooding and moody. An even nicer surprise is the art from Capullo & Glapion: there are some great layouts and the story flows easily. Capullo's McFarlane influence from years of drawing Spawn is still there, but he's made the style into his own. This is a very good first issue, and I'm definitely looking forward to the next (and pleased that there's at least one Batman title in the new 52 that meets what I want from a Batman comic). 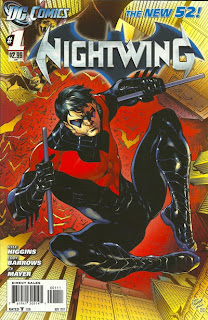 Original Rank/Assessment: 47 (Definitely No) - My level of not caring for any aspect of this is pretty darn high.


This comic almost pulled off the impossible and nearly won me over. Higgins re-establishes Nightwing without ignoring the long history of Dick Grayson, and possibly even ties things in to this week's cliffhanger in Batman. But then we get an out-of-nowhere villain with Wolverine-like claws, who promptly slashes and disembowels two police officers. This is supposed to be a Nightwing comic, not Sabretooth. So back to the bottom of the pack this goes.