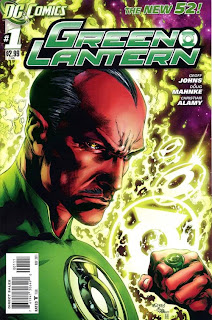 Original Rank/Assessment: 14 (Yes, with Reservations) - Looks like business as usual, so I'll likely stick around for a while.

We were told that the Green Lantern titles would be some of the least changed in the new DCU, and they apparently meant it. This could just as easily been Green Lantern #68, picking up pretty much right where the "War of the Green Lanterns" story ended. That's not to say there aren't changes; at the end of "War" Sinestro had been granted a Green Lantern ring and Hal Jordan is ringless and dumped back on Earth.  The issue opens with the Guardians telling Sinestro that as long as he has a green ring, they expect him to act like a Green Lantern, and he learns that it can be hard to go home again. Back on Earth, Hal gets to show that it's not the ring that makes him a hero and he tries to patch things up with Carol Ferris, but in both cases he proves to be a bit tone deaf to the world and people around him. If you liked Johns' Green Lantern before (and a lot of people did) this is more of the same. 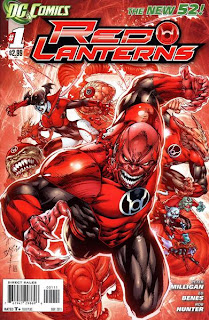 Original Rank/Assessment: 45 (Probably Not) - I really don't think that I need twenty pages of characters vomiting blood each month.

For a minute there I thought they were going to pull off the impossible. This first issue opens with a scene featuring Dex-Starr, the Red Lantern kitteh, taking out his rage on a group of torturing scumbags, including an awesome two-page splash. But after the opening, things went down-hill. There was too much recap, too much of Atrocious standing around and posturing. The Earth-bound scenes seem to be pointing the way towards the origin of a human Red Lantern, but that needs to be clearer and/or happen faster for the first issue. (On the plus side, the Earth-based pages allow colorist Nathan Eyring to give his red crayon a well-needed rest.) Based on the opening, I would totally read a comic that starred Dex-Starr, but the rest of these Red Lanterns just kind of bore me.